Rock View Is More Than Just a Place to Stay

There is a pleasing coherence and connectedness everywhere. It is as if Rock View has emerged from the very earthworks of Annai with its terracotta tones of clays and rocks and the blended browns and greys of the handmade woodwork and roofing shingles that complete the rustic splendour of Rock View. Locally made clay bricks, all produced in the neighbouring village of Kwatamang, are used for walls, verandas and even as terrazzo style floor tiles.

Along the guest room verandas, be sure to take note of the agate embedded walls featuring one-of-a-kind agates and jaspers. The only imported materials are the roof tiles from Boa Vista in neighbouring Brazil and produced by a family-run business there. The combination of natural materials and local artisans reflect the partnership between human and natural resources that has created the Rock View Eco Lodge and its environs. The Rock View buildings are all designed by the owner, Colin Edwards and constructed by local experts such as Narus Edwards and Ivor Daniels from neighbouring villages, many of them trained by Colin in the art of finishing and precision. 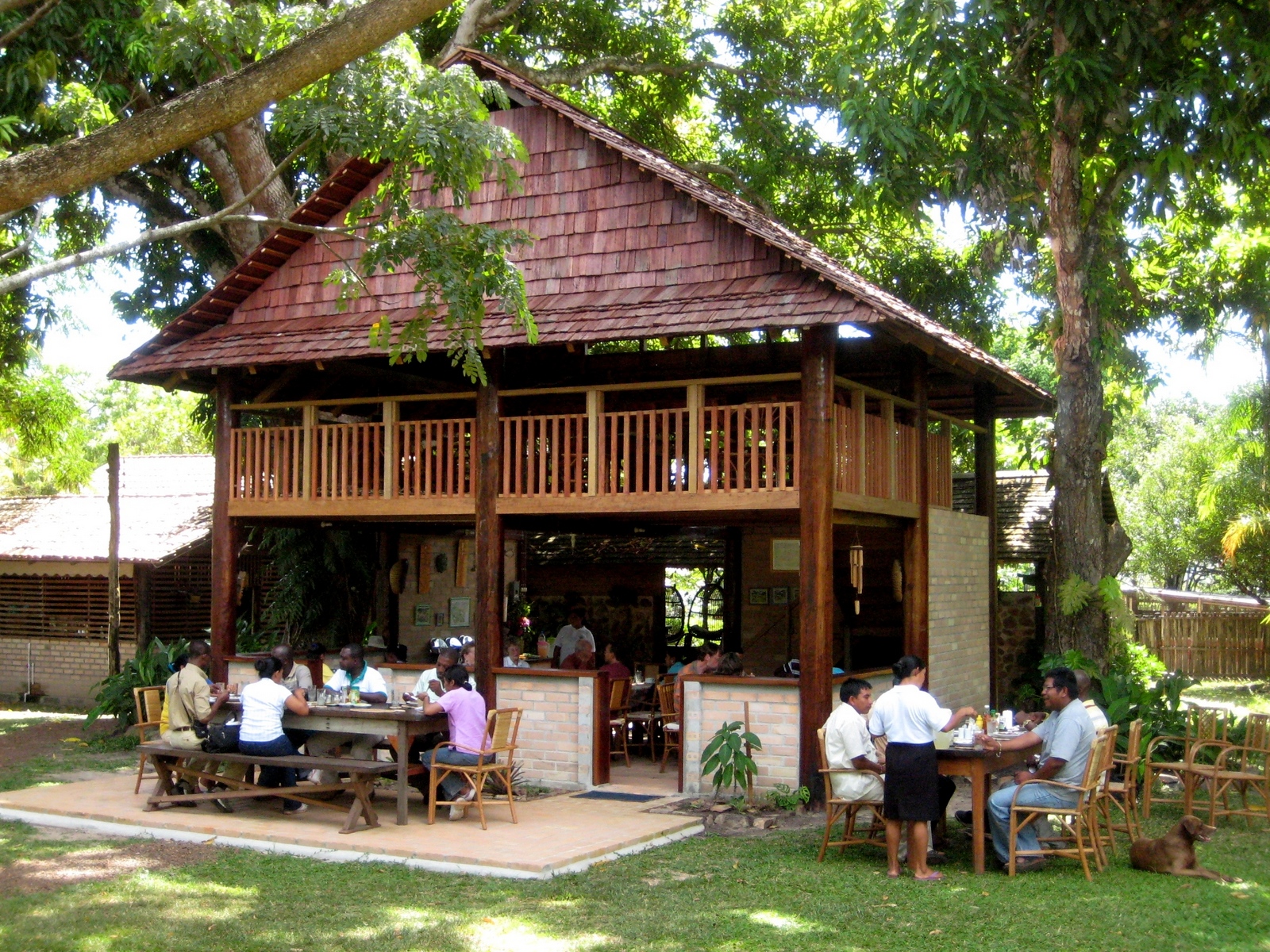 The “tree-house” lounge and patio style dining area are a relatively new addition to Rock View and are a microcosm of its unique design and construction. The location is between the two ancient and towering mango trees, that stand as stately sentinels in the gardens, and under which al fresco meals were enjoyed… until the mango-laden trees began vigorously shedding their fruit on the guests dining below! The roof that was slung is itself a work of art, superbly made with hand made shingles that have weathered beautifully – as only shingles can. The building is adorned by the swirls of “monkey ladders” from the rain forest and twigs on which perch an array of carefully carved and hand painted birds, replicas of the local savannah and forest species that were produced by local sculptors. The tree-house lounge is also decorated with calabash bowls of dried forest fruits and seeds and pods and with part of the Rock View Art Collection, one of the best private art collections in Guyana.

Nowhere else in the North Rupununi can you find such a treasure trove of the arts boasting some of the best pieces by renowned Guyanese, Brazilian and even a few internationally established artists that share space with some of the best work of local artists and artisans. The collection includes a 1970s Philip Moore original watercolour, several George Simon and Philbert Gajadhar, Marjorie Broodhagen paintings and watercolours by Morag Williams, Anil Roberts and the eminent British-based water colourist, Shirley Felts, who has also painted the Iwokrama Rain Forest. Then there are the three marvelous wooden sculptures of Mahatma Gandhi, the Pork-knocker (traditional, small- scale gold miner) and the Harpy Eagle by Bartram, as well as works by Winslow Craig.

These share space with the intricately hand embroideries, akin to miniature tapestries that are made by the Makushi women of the villages through a project transferred from the Red Thread Guyana group, which was developed and introduced by Vanda Radzik and inspired by the work of Valerie Cox of South Rupununi, whose own work is proudly displayed in Rock View.

The landmark Rock that gives Rock View its name and provenance has been beautifully enhanced to bring out its loveliness and its accessibility as a perfect place for meditation, for experiencing sunrise and moonrise over the savannahs and for star gazing at night. The Mandela like clay-brick design subtly engrained into the natural rock platform at the lookout point is an added touch of thoughtfulness and delight. 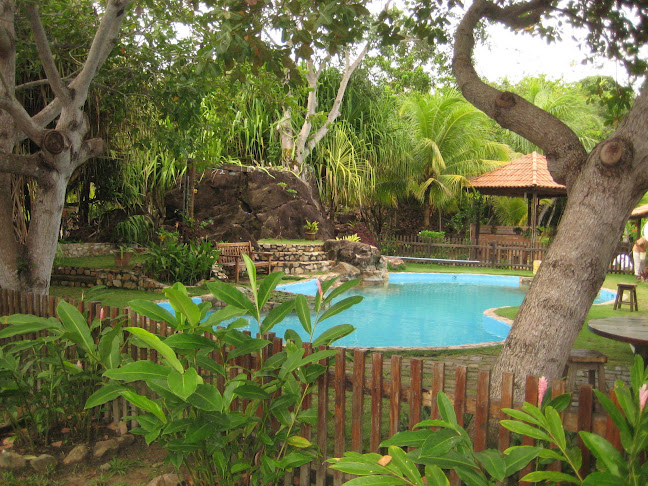 The Rock Pool is just that – a natural pool carved from the bedrock of the Rock View premises with local almond shade trees and a wonderful array of cashew trees including a sublime reef of mangroves that bound the area and a small separate water lily pool nestled within the arms of the main swimming pool. The structure and surrounding landscape makes the Rock Pool uniquely attractive and gives Rock View a sort of natural, spa-like feature. Modern equipment ensures that the Rock Pool is maintained to the highest health and safety standards.

Nowhere else in the local area is there a garden so beautifully and thoughtfully landscaped and so well cared for. This is garden built from the bare savannah earth over the years with a variety of flowering shrubs, bromeliads, forest orchids, and the beloved flowering shrubs, fruit and shade trees that have become sig- natures of the tropical countries of our region: the flamboyant, samaan, mango, malacca, local almond, bougainvillea to name but a few of these transplants. Mixed with these are local bromeliads, palms and forest orchids. Gardening enthusiasts who visit Rock View will be in plant paradise. Check out our plant, animal, and bird lists to get an idea of just what you’ll be seeing! 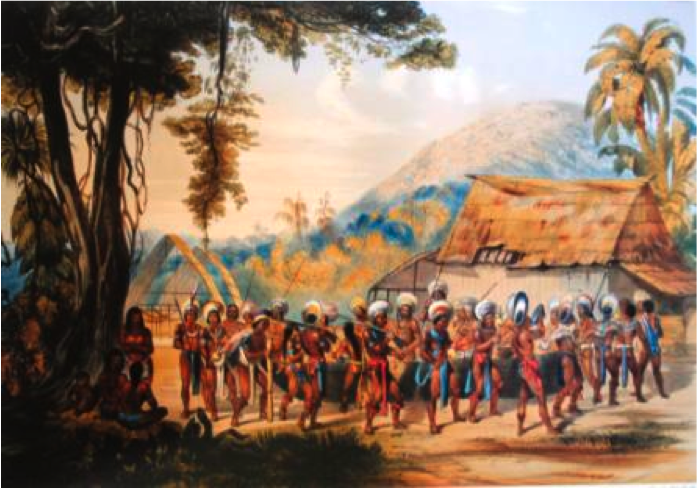 Then there is the library – a veritable treasure trove for the literary and history buff. The collection of books stems from Colin’s own omnivorous reading appetite to which was recently added his parents’ library shipped over from the South of France when they came to live out their final years at Rock View. It is an eclectic collection – old editions of Bates, Wallace, Waterton, Schomburgk – who travelled and explored Guyana and the Rupununi in the 18th and 19th centuries, the finest Victorian and Modern fiction and poetry and contemporary literature. Naturally, there is an impressive section of books by scientists on the flora and fauna and ecology of the Rupununi. 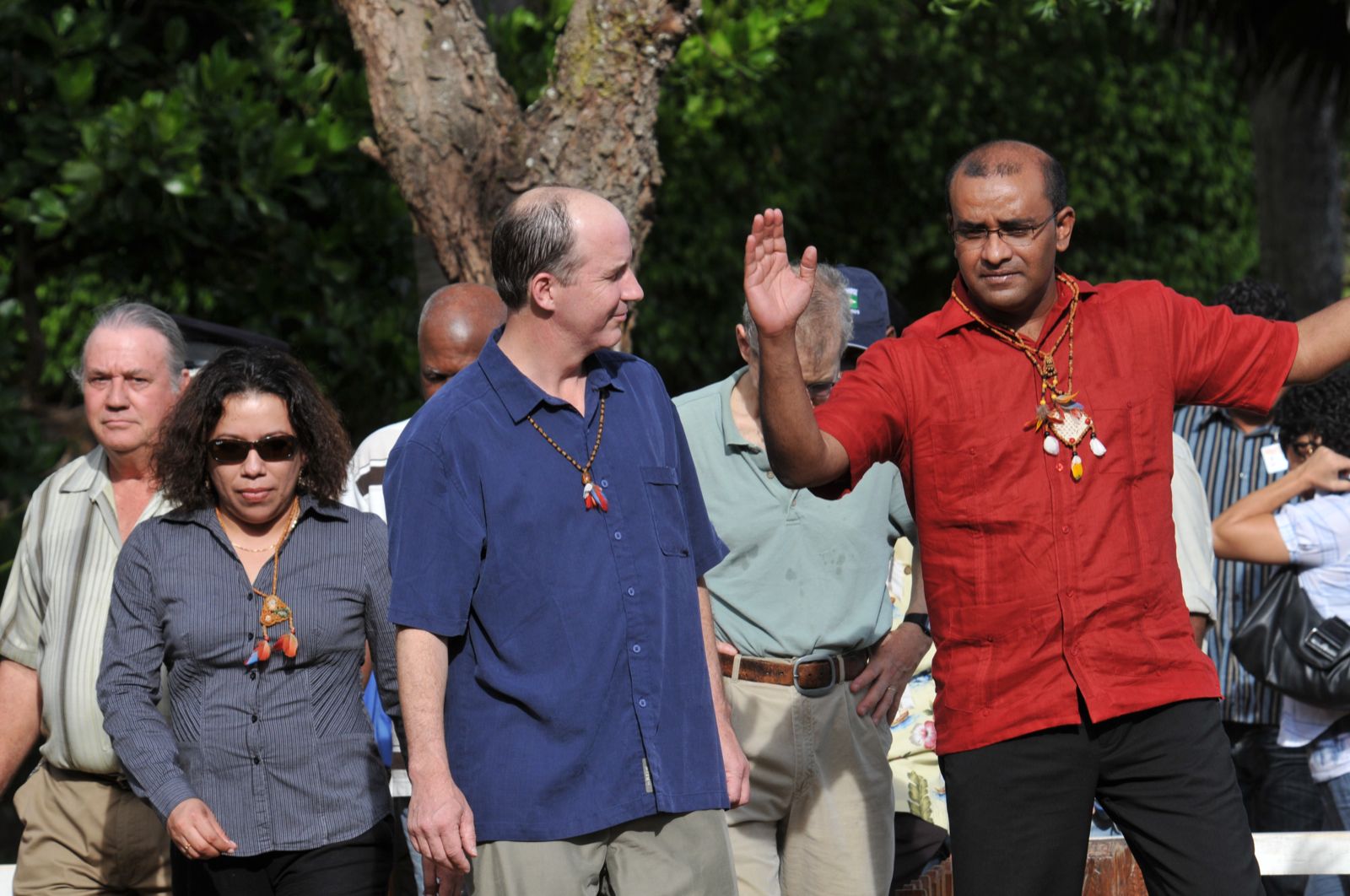 Rock View has also, over the past two decades, been the venue of many historic events that stand as milestones in the history of local community development. The North Rupununi District Development Board (NRDDB), the umbrella organisation of the local leaders of the sixteen communities of the North Rupununi, was founded and unofficially declared one memorable moonlit night at a gathering of leaders under the Rock View mango trees. Rock View also played a role in 1989 with the Iwokrama foundation, Artisan training & production, The Easter Happenings, establishment of the Bina Hill Amerindian Institute for learning, and has hosted Prince Charles, the Prime Minister of Norway, and various Presidents’ meetings with Amerindian Toshaos. Rock View regularly hosts delegations of scientists, researchers, policy makers, journalists, tourism professionals, industrial leaders, and others who appreciate the opportunity to explore a rich but unknown corner of the Americas.