Sydney Allicock is not only a close friend of Rock View, he served Guyana’s Vice President, Minister of Indigenous Affairs and is widely accepted as a pioneer of community-based tourism in Guyana 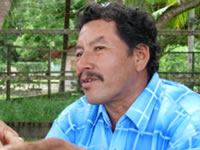 Minister Allicock led the Surama community in implementing a sustainable tourism project that has been copied by other Amerindian communities in Guyana and is considered a model for development of the country’s interior. He serves as the Executive Director of Surama Eco-Tourism, an initiative which employs 70 members of the Surama community as hospitality staff, guides, cooks, artisans, and drivers, or indirectly as farmers, hunters, fishermen, tailors, and maintenance workers. Approximately 60 per cent of the community’s income is now generated through sustainable tourism-related activities, and 75 per cent of Surama’s households derive income from tourism.

Sydney articulates and promotes a vision of indigenous rural community development based on communal effort, wise use of natural resources, traditional knowledge and social systems, and equitable partnership with outside agencies. He has been a key figure in the development over the past two decades of the village of Surama, the North Rupununi region more widely, and Guyana’s indigenous communities, which account for nearly a tenth of the country’s population. More recently, he has served as a member of the Multi-Stakeholder Committee of Guyana’s Low Carbon Development Strategy, a groundbreaking initiative aimed at saving Guyana’s standing forests while receiving international payments, generating income to develop the country and transform its village economies. 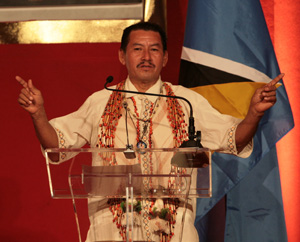 The evening was late and lonely,
But the sun was in all its glory
I sat spellbound on the hills of Rupertee,
Admiring the natural Rupununi beauty
Around me the rolling green and yellow savannah land,
To the East of me the majestic Makarapan
Away into the distant South the mighty blue Kanuku
And beautified by the sunset the well known Pakaraimas too
As I sat soliloquizing
It dawned on me that something was missing

As I gazed away into the Rupununi evening
I focused my mind on some good reasoning
Visible for miles was the dusty old trail and crisscrossing of tracks
The few ranch houses and empty corrals seem now to be only shacks
No vacqueiroes on the great plain doing their normal chores,
Of riding, lassoing or singing out their regular yehoes!
All that was moving were donkeys fighting,
So sickening!
Something was missing,
Physically missing.

While staring over this vast vacqueiro range,
The idea of missing cattle seemed so strange
Can you imagine that cattle were missing!
The famous Rupununi cattle herds slowly diminishing
I remembered the good old days from Dadanawa to Takama
Chasing thousands of cattle over this famous savannah
Now there are only occasional carcasses bleached by the weather
Here and there on the great plain might be a lonely tired rider
Oh Rupununians! Gone are the cattle days,
No more bellowing, horse riding, lassoing nor happy old ways.

The twilight, missing cattle and hideous braying saddened the evening.
The distant hooting of owls and moaning wind against hills left me grieving
I wondered, could it be politics and development
Or was it rustling and poor management?
The cattle were gone, perhaps over the border,
And here is where we can go, and no further.
Over hills, through valleys or on the plains,
Through night, sunshine or in the rains,
Here I’ll roam and here I’ll remain,
Determined to rear cattle once again!